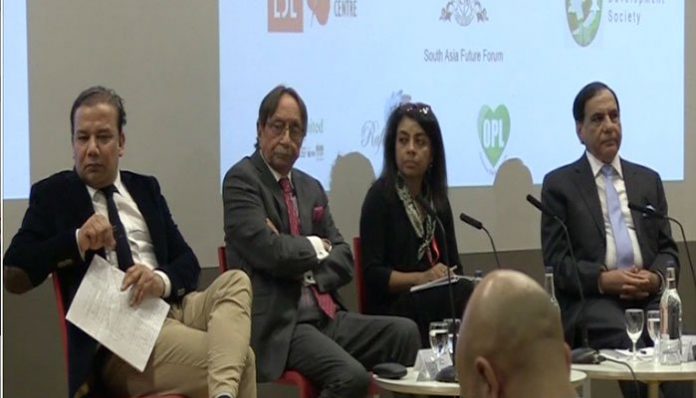 LONDON, OCT 08 (DNA) – Former spy chiefs of Pakistan and India have said that the diplomatic talks and communications between the two countries are essential and helpful for the national interest of both countries. Former Inter-Services Intelligence (ISI) director general General (r) Ehsanul Haq and former Research and Analysis Wing (RAW) chief Amarjit Singh Dulat took part in a public debate at the London School of Economics’ Sheikh Zayed Theatre, which was organised by South Asia Centre, LSE’s Pakistan Development Society and the South Asia Future Forum.

The former spymasters were of the view that communications boycott should end as war was no longer an option between the two countries.

During the event, both Haq and Dulat spoke at length about the intelligence perspective of their countries and answered the questions of the audience.

“Interaction must be such that even when there is a breakdown in diplomatic relations between states and entities, the intelligence channel must continue because that becomes the last resort for venting and pre-empting crisis, the initiative for this has to come from the political level down,” said Gen Ehsan, answering a question and emphasising that the Indian government had done no favour to the region by ending communication channels.

Intelligence sharing between India and Pakistan at one point may have “saved Pervez Musharraf’s life which in a way was acknowledged,” said Dulat.

In his opening remarks, Gen Ehsan acknowledged that the differences between India and Pakistan, especially because of the Indian held Kashmir dispute, had led to regional instability, adding that India has been fomenting trouble in Balochistan and mainland Pakistan through Taliban groups.

Arrest of Indian spy Kulbhushan Jadhav from Pakistan and revelations made by him proved that India has been using terrorist means to harm Pakistan.

Shedding light on Indian atrocities in Kashmir, he said that over the period of around one year, through the use of pellet guns, more than 100 Kashmiri youth have been martyred by Indian occupation army.

“Kashmir’s indigenous struggle has moved to a new generation.”

To this, Dulat, while agreeing that many Kashmiri youth have been killed, claimed that “lots of Indian soldiers have also been killed”.

He went on to say that India should not cut ties with Pakistan as it makes no sense to him, adding that even in worst days of the Cold War, the CIA and KGB talked to each other.

Answering questions about Pakistan providing safe havens to terrorists as accused by US President Donald Trump and many foreign media outlets, Gen Ehsan said that countries decide about such situations as per their circumstances, giving examples of Northern Ireland, Britain and the American and Afghan approach of dealing with Taliban and added that Great Britain called Irish Republicans terrorists but brought normalisation after deradicalising and mainstreaming them.

Ehsan said that Pakistani extremist groups are “entities which have been involved in various militant activities and we have to tactically deradicalise them. The approach must be correct and must be part of our national strategy”.

Lauding “political stability” in Pakistan, he said that it was encouraging to see Pakistan Tehreek-e-Insaf (PTI) and its allies not seeking military intervention during 2014 sit-in but the democracy remained which was only disrupted when the sitting prime minister (Nawaz Sharif) was ousted by the court in Panama Leaks case.

While talking about Kashmir issue, Dulat claimed that none of the mainstream political parties in Pakistan have mentioned the Kashmir issue in the last 15 months and during 2013 election campaigns.