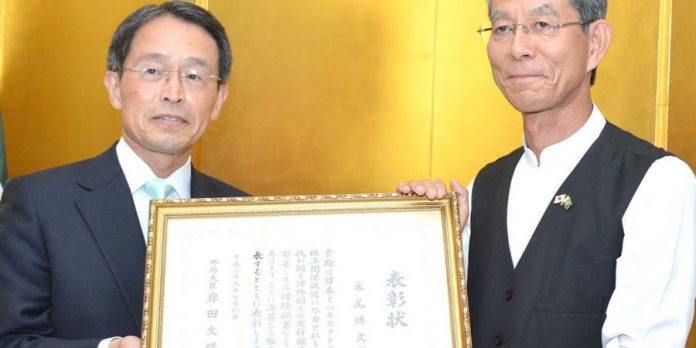 ISLAMABAD, AUG 23 (DNA) – The Ministry of Foreign Affairs of Japan has awarded the Foreign Minister’s Commendation to Hirofumi Nagao, former Chief Executive and Managing Director of Pak Suzuki Motor Company Limited, in recognition of his significant contribution to the promotion of economic relations between Japan and Pakistan. The Commendation Award Ceremony was held today at the official residence of the Ambassador of Japan to Pakistan Takashi Kurai. On behalf of the Minister for Foreign Affairs of Japan, Kurai conferred commendation to Mr. Nagao.

The Foreign Minister’s Commendations are awarded to individuals and groups with outstanding achievements in international fields, in order to acknowledge their contributions to the promotion of friendship between Japan and other countries and areas.

Summary of Contribution “Hirofumi Nagao, former Chief Executive and Managing Director of Pak Suzuki Motor Company Limited, has served as an executive of Pakistan Automobile Manufacturers Association (PAMA) for 9 years, during which he has been appointed its president three times. All in all, he has worked for about 20 years in Pakistan as a representative of Pak Suzuki Motor Company Limited in his three tenures. 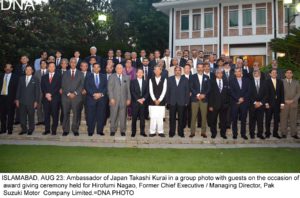 During his career in Pakistan, he has contributed not only in the development of Pakistan’s automobile industry but also in strengthening the overall economic relations between Japan and Pakistan through vigorous activities such as supporting Japanese companies related with Automobile industry to invest in Pakistan and improving the image of Japanese automobiles. He has also made efforts to upgrade the business environment for foreign companies in Pakistan, through policy recommendations to the Government of Pakistan.

Moreover, the Corporate Social Responsibility Activities in the field of education, health and environment, by Pak Suzuki Motor Company Limited, has been highly appreciated and well accepted in Pakistan, which has contributed to the deepening even further of the relationship of mutual trust between Japan and Pakistan”.=DNA