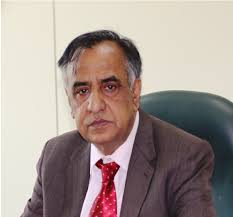 Earlier on Tuesday, when Hijazi submitted a petition seeking bail to the IHC’s registrar office, he was told that the high court was not the correct forum and he was advised to approach the Special Judge Central (SJC), the special court of the Federal Investigation Agency (FIA).

However, the petition was forwarded along with the registrar’s objection to the court of Justice Mohsin Akhtar Kiyani. Granting Hijazi a transit bail, Justice Kiyani ordered him to approach the SJC.

Hijazi remained seated inside the court for fear of arrest as the petition was sent back to the registrar office for necessary changes for approval of transit bail. Hijazi had filed for a pre-arrest bail as per Section 498 of the Criminal Procedure Code of Pakistan.

The SECP chief’s counsel, Sheikh Ansar, cited medical grounds as the basis for the request.

As per the plea, the jail environment was not conducive to Hijazi’s health, as he was on medication after a kidney transplant. Hijazi’s request further stated that he wanted to be part of the investigation to ‘prove all allegations levelled against him wrong’.

An FIR was registered against Hijazi on the directives of the Supreme Court on Monday for tampering official records.=DNA