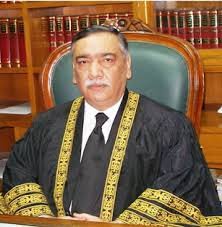 ISLAMABAD, JUN 05 (DNA) – Justice Asif Saeed Khan Khosa on Monday (today) took oath as the acting Chief Justice of Pakistan, it has been reported. According to media reports, Justice Ejaz Afzal Khan administered the oath to him in a simple ceremony, attended by the attorney general, the advocate general  Islamabad, judges of the apex court, senior lawyers and law officers in Islamabad.

According to reports, Justice Asif Saeed Khosa will act as CJP during the period that incumbent CJP Justice Mian Saqib Nisar travels abroad.

Justice Khosa, the senior most judge in the SC  to lead the five-judge bench on the Panamagate issue. He had disqualified Prime Minister Nawaz Sharif in his 192-

page judgment but since the opinion of the judges was split in the 2:3 ratio and Khosa’s views belonged to the minority opinion, hence, his decision did not have binding effect on anyone.=DNA