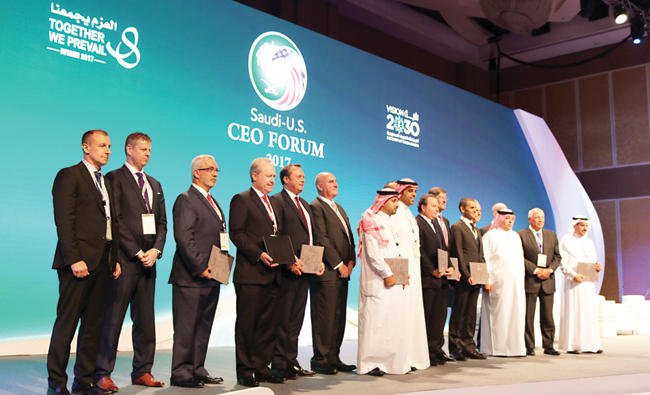 RIYADH: The inaugural Saudi-US CEO Forum witnessed the signing of dozens of business agreements on Saturday as part of enhancing the bilateral trade relations between the two countries. General Electric (GE) announced signing $15 billion in business deals with the Kingdom, which falls within Saudi Arabia’s drive toward economic diversification away from oil, Reuters reported. The forum, which coincided with US President Donald Trump’s visit to the Kingdom, focused on exchanging ideas and exploring investment opportunities.

Saudi Aramco and Jacobs created a joint venture for social infrastructure program management throughout Saudi Arabia and the region.

“Our joint venture exemplifies the power of bringing together Saudi Aramco and Jacobs as an effective economic catalyst to support the Kingdom’s Vision 2030,” said Steve Demetriou, chairman and CEO of Jacobs.

Honeywell and Saudi Aramco also announced that they have signed a memorandum of understanding (MoU) that advances the In-Kingdom Total Value Add (IKTVA) Program, which drives localization of content. As part of the agreement, Honeywell will undertake commercial efforts to assist Saudi Aramco in achieving the goals of the IKTVA Program by 2021.

The forum is a testament to the bilateral commercial relationship, Khush Choksy, senior vice president of the US Chamber of Commerce’s Middle East and Turkey Affairs International Division.

“We have 50 of our CEOs representing the largest companies in the US at this Saudi-US summit,” he said.
Choksy added that the political and security relationship is stronger than it has been in recent times.
“I have never seen this much optimism demonstrated by the American business community… It is tremendous progress that the Kingdom has envisaged toward the goals of the Vision 2030 over the past two-to-three years.”
Saudi Energy Minister Khalid Al-Falih disclosed that the relationship in the fields of trade and investment between the Kingdom and the US is part of the close friendship between the two countries, during his speech in the “Ministerial Panel: 21st Century Partnership.”
He pointed out that there are many great opportunities to move the relationship between the two countries to higher levels. “Our slogan in this forum is partnerships for future generations, not only the historical relationship between the two countries but also a transitional phase and a major impact on generations in both countries, Al-Falih said.
Saudi Finance Minister Mohammed Al-Jadaan said that Vision 2030 came in response to a number of challenges facing the Kingdom. “The private sector is one of the important factors in the Kingdom’s Vision 2030 to contribute to the domestic product,” he said.

The ongoing US-Saudi summit and the parallel high-level activities constitute “a historical opportunity to strengthen and deepen the economic and financial relations and the partnership between the two parties,” Mohammed Al-Ardhi, executive chairman of Investcorp.

Investcorp started this work 35 years ago and “we became an established investment bridge that keeps growing and offering investments opportunities on both sides,” Al-Ardhi added.
In her speech on the forum’s ministerial panel, Lubna Olayan, CEO of Olayan Financing Company, said that licenses being issued and joint ventures being signed on Saturday will add to the historic relations.
“We should not lose sight of the fact that defense, oil, investment and finance, education and medicine are all areas where there is a long history of cooperation,” she said.
Trade relations are evident in both established and new sectors. Choksy said that in addition to the Kingdom’s expansion in the petrochemical sector, the mining sector is also developing. “Digitization and new economy, information communication technologies (ICT), as well as health care, defense and security are among the strongest sectors in which Saudi Arabia and the US are cooperative.
The strong political relationship makes a solid basis to resilient bilateral trade relations, Choksy added: “Saudi (Arabia) has experienced economic progress at a tremendous pace in terms of accomplishments. So the political relationship is an enabler. The economic progress is a facilitator in terms of companies being able to engage and do business in the Kingdom. And I think it has come together beautifully.”=DNA