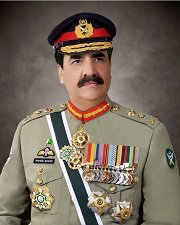 According to monitoring report, keeping in view of the prevailing situation at Line of Control (LoC) and continuing operation against terrorists both in tribal areas and Karachi and elsewhere, the army chief may be asked to continue in service for another year.

In this emerging situation various military officers are expected to get promotions. Efforts would be made that in case of continuation of service of the existing officers, the seniority of other officers is not affected.

The monitoring reports further suggest that the current Chief of General Staff Lt. General Zubair Mahmood Hayat may be made vice chief of army staff and 4th in the seniority list Lt. General Ashfaq Nadeem Ahemd may be appointed Chairman Joint chiefs of staff committee.

It may be mentioned here that Lt. Gen Wajid Hussain and Lt. General Najeed who are at number 2 and 3 may not be considered for four star generals because they have never commanded any corps.

The report further suggests, next month many transfers and postings are expected in the army and many corps commanders and principal staff officers are likely to be reshuffled.

The army chief extension issue was in news for quite some time. To put a damper on these notions the army chief himself had made it clear that he was not interested in extension.

However, few months ago, the ISPR head Lt. General Asim Saleem Bajwa while responding a question did not outright dispelled the notions and said the decision will be taken as per the prevalent situation, which give some credence to reports that there may be a change of policy regarding the extension issue.

Even at the UN when the prime minister was asked to comment on this issue, he preferred to avoid that question.

Commentators believe, if there is no extension in service of the army chief then most likely Lt. General Ashfaq Nadeem may be next chief of army staff with Lt. Gen. Zubair Mahmood Hayat as the Chairman Joint Chiefs of Staff Committee.=DNA