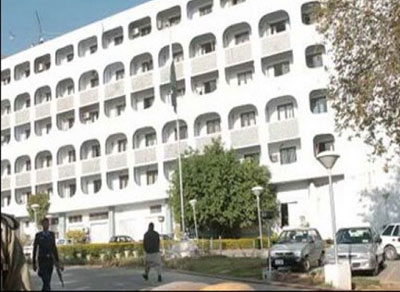 ISLAMABAD (DNA) – The foreign office women association has reacted to a TV programme about corruption allegations by saying, distortion of Facts Relating to Philanthropic Activities of Pakistan Foreign Office Women’s Association (PFOWA) by a News Channel, it would be recalled that TV anchor, in a programme aired on on 24th November 2015, had tried to cast aspersions on the philanthropic activities of Pakistan Foreign Office Women’s Association (PFOWA). The allegations were rejected by PFOWA as baseless and unfounded, in a press release issued on 25 November 2015.
In his characteristic style, the acnhor once again attempted to malign PFOWA and its leadership and charitable activities in a TV programme aired on 4 January 2016. He mislead the people of Pakistan by distorting facts relating to a school of international standard being built in partnership by PFOWA with Roots Millennium Schools (RMS), an outstanding academic institution well-known in Pakistan and abroad for imparting education par excellence. The school will offer its services to the children of residents of Islamabad, diplomatic corps and foreign Office personnel.
He inter alia, alleged that an expensive plot of land measuring ten Kanals in the heart of Islamabad, given by the Capital Development Authority to PFOWA, had been handed over to the RMS for building the school at a throwaway price. The factual position is that the plot of land was allotted on a lease to Pakistan Foreign Office Women’s Association (PFOWA), which is a registered welfare and charity organization run primarily by the spouses of Ministry’s officers. The land has not been given to RMS. In fact, PFOWA entered into a Joint Venture with RMS last year after an open, transparent and competitive process to establish a quality educational institution in Islamabad. The ground breaking ceremony of the school was performed on Jan 05..
RMS would invest more than Rs. 500 million to build the school, which would impart education among others to the children of low-income employees of the Ministry.
The Joint Venture is time-bound and provides for 50% discount to the children of the officers and staff of the Ministry of Foreign Affairs. Certain seats would also be reserved for the education of needy and deserving children. Three percent of the school’s annual revenue will be contributed to the charitable work of the PFOWA. PFOWA remains 100% lease holder of the plot of land. The establishment of a quality school would help in ensuring quality education for children of low-income officials of the Ministry of Foreign Affairs.
As stated earlier, the scope of PFOWA’s welfare activities extends beyond the Foreign Ministry. It has contributed relief assistance to flood and drought affected areas of the country. PFOWA mobilized resources and established a Girls School in Chinari following the October 2005 earthquake. It also donates to other charity organizations and has institutional partnerships with several philanthropic entities.
It is truly sad and disappointing that ARY News, a reputable TV channel, should allow its programmes to be used by journalists of a typical mindset to malign an organization that has received nationwide recognition and acclaim ever since its establishment, soon after Pakistan came into being.

PFOWA believes that there is a need to light more torches in Pakistan by building more schools, and no effort should be made by anyone to extinguish the ones that have already been lit with indefatigable efforts. PFOWA will continue with its mission, irrespective of the designs of its detractors.